Adire ((AH-dih-ray)) which means tie and dye is the name given to the indigo-coloured dyed cloth used by women of the south western part of Nigeria, Africa using different types of resist dye techniques. Early records show that these tied designs became commercial  in the early 20th century when exposure to imported European textile material  materialized, and paved the way for local women dyers to innovate new artistic designs on these materials. However, in earlier centuries, adire appears to have been highly regarded; the tunic pictured solely on the right was acquired in the 1640s 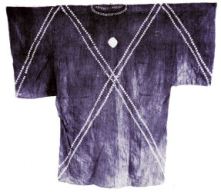 by a German collector who said it was the kind given by the “king” in a “knighting” ceremony (i.e., given to warriors by rulers).  But by the mid-1950s, adire was considered a “budget” fabric worn only by less well-off women and by men as sleeping cloths, and as a way to recycle faded cloth.   Not until the 1960s did adire become fashionable in West Africa, when expatriate African and African-American men started using adire for shirts as attractive way of celebrating their heritage.

The influx of European clothing materials in the mid 1930s  did give rise to new techniques of resist dyeing including the practice of hand-painting designs on the cloth with cassava starch paste prior to dyeing known as “Adire Eleko”. This was also a means of cottage-industry income for Moslem women who were rarely permitted to leave their homes. Another method was to use sewn raffia, sometimes in combination with tied sections, while other cloths were simply folded repeatedly and tied or stitched in place. The basic shape of the cloth is that of two pieces of shirting material stitched together to create a women’s wrapper cloth. Examples of popular designs are the jubilee pattern (produced for the King George V and Queen Mary 1935), Olokun (goddess of the sea), Ibadandun (Ibadan is sweet).

Adire has obviously undergone some rapid transformation with regards to production and use over the past few decades. With the introduction of modern technology, innovation in the fashion industry and the Diaspora, there has been the introduction of other multicolour styled adire (other than the traditional blue),lighter tighter woven commercially made cotton materials, brocade, and other luxury textile material. Also, the introduction of the sewing machine allowed the creation of more detailed and elaborate patterns on these fabrics.

Has Adire taken a back seat in the fashion industry? Locall, I would say yes; but we seem to see more and more foreign designers and catwalk models adorning this artistic attire eloquently more than ever before. Combining adire with modern designs gives the ever so brilliant spectrum of colours a dazzling effect which can be spotted a mile away. Adire can be considered as being a natural summer attire which, with the effect of the sunshine on the material, creates a brilliant look…But then, the possibilities with adire are endless.

Stealing in the name of Jesus?

Christianity which literally means “Christ likeness” was established in the 1st century by disciples of Jesus mainly Peter, Matthew, James and John. Their immediate focus or should I say mission was to propagate the gospel (good news) across all nations…but these days, things have changed.

Now let us time travel all the way back to recent times; the Church has all of a sudden become a lucrative business in some quarters. With tax free money from offerings, donations from philanthropists, pledges, tithes and offerings,it is very easy for someone who is amoral in nature to get carried away by the amount of money coming in. This brings me to the subject matter “Stealing in the name of Jesus”.

Who was Jesus by the way? The bible says “He went about doing good, healing the sick and raising the dead”. I am not here to preach but to point out that the agenda of some present day pastors and preachers has obviously shifted from the foundation of their calling. There is more focus on the contents of people`s wallets, purses and bank accounts and how relinquishing their contents will make the bearers more prosperous. These teachings have been misconstrued and purported for selfish interests with no sense of altruism by some present day “Prosperity preachers”.

Over time, the Church has been invaded by corrupt, greedy money conscious people. There are still a whole lot of good hearted, dedicated preachers out there who live up to their God ordained expectations(or at least try to),but as the saying goes, “A few rotten eggs spoil the bunch”. How do you go about preaching to people out there when all they see mainly are the flashy typed, money focused pastors? Some of them say “My God is not a poor God” which I will agree to (as a matter of personal opinion), but he does not take money from innocent hardworking people does he?

Take Nigerian in Africa as an example, we have churches springing up in every nook and cranny, meters apart. I once counted 10 churches on one single street and could not help but wonder what the heck was going on? Most of these churches do not preach about righteousness, holiness and other core principles on which the religion was founded on but rather on the principle of the sower, the Shunamite woman, and chapters from Malachi, Melchizedek, and principles of prosperity (which will involve you dipping into that wallet or purse). They will hardly mention passages like the widows mite, and some other bible passages that involve giving what you can and not ruining your finances in the process. These types of preaching are quite predominant in countries with widespread poverty, economic and social problems hence the need for supernatural interference based on Christian belief.

When you start giving money to your church and get to the point where you cannot provide for your family or take care of your daily needs, the same bible which talks about giving says you are an infidel 1Timothy 5:8. Now why would any preacher ask you to give money which you cannot afford? The whole prosperity promotion agenda has obviously turned into a marketing strategy! Quite similar to buy one get one free, Gala Bingo, 888 or any other gambling operator! Jesus spoke about the principles of giving but never hammered on it, He was not into enriching himself out of the then church’s fund, he was not flashy because the disciples borrowed a donkey when he entered Jerusalem on palm Sunday in Matthew 21 (if he was flashy, he would have bought a horse and chariot or something like that).

I have a message for all those self-enriching pastors, general overseers, reverends (ironically named) etc out there, PRACTICE WHAT CHRIST PREACHED! Instead of using the money got from offerings, tithes and pledges to feed the hungry, support the widows, provide for the jobless, tend to the sick, shelter for the homeless, just like the bible says, you go around driving the latest flashy cars, adorning the “Blings” and living the celebrity lifestyle! Where is the Christlike humility in that?

A word of advice for the “givers” Matt 10:16 “Behold, I send you forth as sheep in the midst of wolves. Become therefore wise as the serpents and guileless as the sheep.” We have to be aware of these kinds of preachers and avoid them like a plague since all they do is usurp money off gullible people to enrich themselves. They focus more on prosperity than the basic principles of the bible which is “Love your neighbour as yourself”. Be choosy when it comes to where you give your money (if you want to give), if you sow seeds on rocky terrain, it will wither away.

It is about time to name and shame all those who enrich themselves “in the name of Jesus”, those who live the lifestyle that they normally cannot afford by digging into God`s pocket, those who do not live up to the basic principles of Christianity but treat their church members like cattle” Fatten them and feed off them”. Be not deceived God is not mocked, whatsoever a man sows, that will he reap. Change your ways before it`s too late! If God does not do anything for now, the Law eventually will.

As usual, your opinions on these matters are golden. Enjoy the video attached, a short documentary showing the moral decadence of some pastors and comment as you wish.

African countries have the oldest, long serving leaders in the world, fact! What I intend to show (with proof) below is a list of African leaders, their age, and tenure so far, and compare them to world leaders outside of Africa. After this, we can then discuss the underlying reasons behind such ridiculously long tenures.

This makes the average tenure of these well known worldwide leaders 28.14 years. That is 7 terms for a British prime minister or an American president!  Now let us look at the longest serving “democratically elected” president or prime minister using the 20th century as a benchmark.

I am not saying, and do not get me wrong, that we do not have leaders in other countries of the world who do the same. If we look at Cuba for example, Fidel Castro had been in power since 1965 and only resigned this year due to health reasons. He handed over power to his brother Raul in April hence turning the Cuban government into some makeshift monarchical leadership structure. My Focus in this blog is Africa which leads me to the questions:

Whatever the case is, the time bomb is ticking tick, tick, tick.

We all know what happened to Colonel Mummar Gaddafi over this past month and how the same people he ruled for some 30 odd years turned against him and hunted him down, killing him like a common criminal and airing it live for the world to see.

The truth is that most of these long serving greedy leaders came into power under very criminal circumstances plagued with murder, coup de tats, false imprisonments of innocent people, exile of officials from the previous government and so on. These vile leaders have therefore decided to hold on to the leadership of their countries and its running to feed their greed and selfish interests while not giving any opportunity to the younger, fresh idea generation to have a go at leadership.

It is also interesting how the Western governments host these individuals and invite them for banquets and important occasions. Well, I feel like this is double standards by all standards but then “Africans” need to resolve “African problems”. If the people do not revolt but mumble under their breaths, how will this continuous holding on to power by self-centred, personal gain focused, shameless African leaders cease?

We cannot move forward as a continent if these leaders remain in power, we cannot develop as a continent with vast resources if some African leaders are more focused on usurping money and amassing wealth. Corruption is spreading across all generations and age bracket, it has become a norm…”Even the president is doing it”!

We need a redress, an overhaul, a change in game plan and leadership, otherwise Africa will always be “THAT JUNGLE”!!!

As usual your opinions on this issue are golden and expected. Please comment as you please.